Why prescribed burning has never been so important to Australia

The purpose of a fuel-reduction burning program is not to stop bushfires, but to assist with their safe suppression. To understand this properly it is necessary to understand the complex and dynamic process of bushfire suppression.
Bushfires burnt millions of hectares in NSW and Victoria this summer.

There are a variety of firefighting strategies and tactics that can be used in different situations, depending on weather conditions, fuels, topography, fire behaviour, fire shape, fire position in the landscape, fire intensity around the fire’s perimeter and the resources available for suppression work.

A fire controller (the person in charge of a bushfire suppression operation) needs to take all of these factors into account when planning his/her strategy. Rarely is a direct attack on the head fire possible – it’s usually too ‘hot’. Instead, firefighters resort to alternative strategies including a combination of direct, indirect and parallel attacks.
But in every case, the options, and likelihood of success, are greater if the fire is burning slower and at a lower intensity because it is burning in young, light fuels.

Appliances such as water bombers have little effect on an intense forest fire, but can assist to control slower moving, lower intensity fires.

Fire intensity varies around the fire’s perimeter and can drop overnight, affording suppression opportunities. There will almost always be a place on the fire’s perimeter that can be attacked – even under severe fire weather conditions – and if fuel loads are low, this window of opportunity widens significantly.

The most trying bushfire situation occurs when there is wind shift and the long flank of the fire becomes a wide head fire. Therefore, containment work on the ‘pressure’ or ‘danger flank’ is always the priority. This is more likely to succeed in young, low-fuel situations when flank fire intensity is relatively low, even under severe weather conditions.

If part of the fire is burning in very light fuels as a result of prescribed burning, this section can take a lower priority, allowing resources to be deployed to higher priority areas around the fire perimeter, or to defending properties, or they can be dispatched to other fires in a multiple fire situation.

Prescribed burning provides ‘anchor points’ and ‘tie-in’ points for firefighters. These low-fuel areas are very important for indirect suppression strategies including back burning. Attempting to back burn in old, heavy fuels against old, heavy fuels is a slow, demanding, dangerous and risky process.

The speed of construction of containment lines is crucial in the battle against a growing fire. Fire suppression is a race in terms of rate of fireline construction and containment verses rate of perimeter growth of the bushfire. Fires burn more slowly in younger, lighter fuels, not only improving the likelihood of early control, but increasing the odds of firefighters getting the upper hand.

There are two other critical ways in which fuel reduction programs assist with wildfire control.
The first is that it allows fires to be suppressed in the lead-up days to extreme conditions. Firefighters are nearly always overwhelmed when catastrophic conditions affect fires that are already burning in the landscape. The presence of low fuel areas makes it more likely that these fires can be controlled before the catastrophic conditions occur.

The second is that when there are multiple fires on the same day, as occurred during the Cyclone Alby crisis in WA in 1978, fire controllers can set up a triage response.

Fires burning into one or two-year-old fuel can be temporarily ignored, while all the focus is placed on the most threatening fires. This allows the best use to be made of resources. 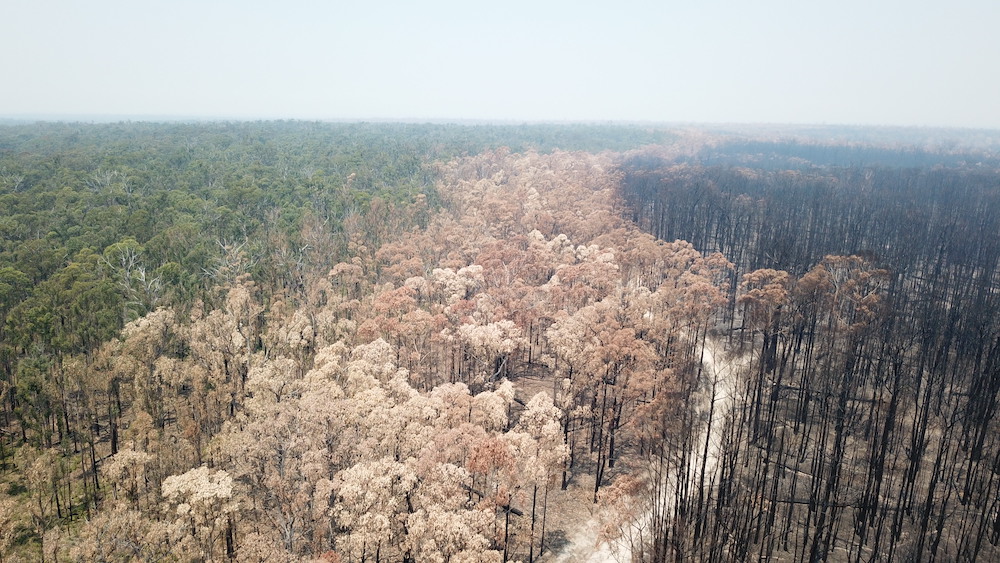 Thanks to Garry Squires

Regardless of fire weather conditions, to firefighters, fuel load matters. It directly affects fire intensity (heat energy output) around the fire’s perimeter, and the size of the suppression windows in space and time.

Also, containment line break-outs such as hop-overs and spot fires are much easier to control in light fuels than in heavy fuels.
The fuel load burning behind the flame zone, which is greater in older fuels, is critical for suppression difficulty because total heat output acts in a number of ways. It is an input to convection which increases wind speeds in the flame zone, boosting ember spotting and fire behaviour. It increases the likelihood of high energy release rates and deep flaming, conditions that can trigger a transition to a dangerous and unpredictable plume-driven fire. It increases the likelihood of re-ignition and breaching of the containment line by burning across it or by blown embers or by hop-overs.

Radiation from glowing combustion adds to the heat load on firefighters and increases the time that the burnt ground can be used for safe refuge. It substantially decreases the effectiveness of water and other retardants applied from the ground or from the air.

Heavy fuel also hinders fire line construction and in some fuels they make it impractical.

Of the elements that make up the bushfire triangle – fuel, weather and oxygen – only fuel can be managed. But this must be done the right way. It must be underpinned by good science, well planned and well executed by trained, experienced people who are well resourced.

Prescribed burning is costly and comes with an element of risk, but the alternative – a cycle of bushfires – is far more costly to humanity, to communities and to the environment.