The Dwellingup Fire – Lessons From the Past

G B Peet and A J Williamson

Why go back to a fire that occurred over half a century ago? What can it tell us that is relevant to our situation today? Unfortunately, it can tell us a great deal, as our forest estate is now in a similar condition to what it was just before the fire. The stage is the same. All we need is a similar combination of weather and multiple ignitions, and we are certain to be faced with a similar disaster.

The Dwellingup fire was a pivotal event for the Forests Department of the day. The intensive post-fire review brought about major changes in fire management policy and procedures and provided some fundamental lessons in forest fire management that are just as relevant today.

Some may argue that we have far better fire suppression capability these days – better communications, better detection systems, better on-ground equipment and airtankers. True, we do have those improvements, but, crucially, we do not have twice the number of very experienced fire crews that were available in 1961, nor do we have the large pool of timber industry workers who could be used to back up Forests Department resources. As all firefighters know, its not the media-attractive airtankers that extinguish forest fires, it’s the men on the ground. Furthermore, we do not have the ready availability of large numbers of bulldozers that could then be called upon for fire fighting. The undoubted improvement in suppression capability in these ways, plus the paucity of large forest fires in recent years, has lulled many into a false sense of security, and a naïve faith in the fire suppression paradigm.

The overall fire management policy of the Department, at the time, is described by McKinnell in another paper at this seminar. Suffice it to say here that, while the fire plans indicate that 40% of the forest in the area near Dwellingup had been burnt in the previous 6 years, the burns were generally small in size, were extremely patchy due to concerns over damage to regeneration, and there were large areas of heavy fuel up to 20 years old still remaining between burnt forest. Knowledge of fire behaviour was rudimentary at that time so the approach to prescribed burning was very cautious. Much of the burning in the previous 6 years had also been located in forest east of Dwellingup, rather than in the main forest belt.

Events as They Unfolded

The previous winter had been very dry. Rainfall was only 68% of the average for the winter period. Temperatures were above average in October and November, and it was very hot and dry in January. During the fire temperatures were 38°C or higher and the relative humidity was unusually low. Winds were generally 18 to 30 km/hr, i.e., not considered difficult, but became much higher during thunderstorm gusts. At those times many escapes occurred. Gusts to 50 km/hr occurred during the massive spread on the Tuesday night, accompanied by spotting up to 8 km ahead of the main fire front.

On Thursday January 19 a large number of lightning strikes occurred, in an area stretching from Dwellingup in the north to Manjimup in the south, with further strikes on the following day. Little or no rain fell at the time, but in view of the fuel loads that existed, heavy rain would have been needed to extinguish the lightning strikes. At Dwellingup there were 9 strikes on Thursday and a further 10 on Friday. Due to these other fires, very little support could be provided to Dwellingup from other areas in those critical two days. Figure 1 shows the location of the individual fires. 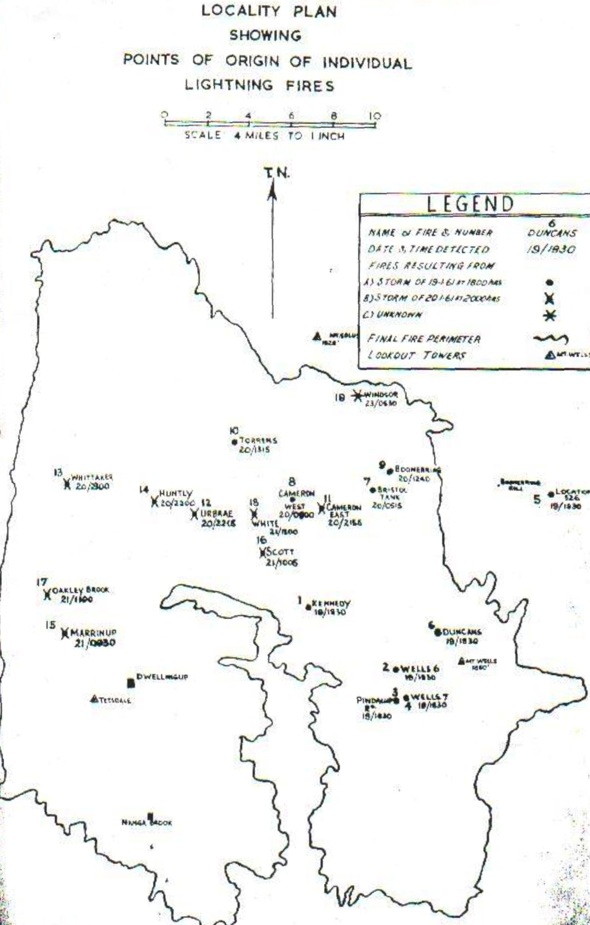 Despite this massive multiple fire situation, Dwellingup forces had almost controlled the 9 strikes on Thursday, before the next 10 strikes outflanked much of their established firelines. Fire crews were recalled to Dwellingup on Saturday after the Torrens 10 fire crowned and spread very rapidly with intense spotting. Three more strikes were reported on that day. With so much smoke around the region, the tower-based fire detection system became almost useless.

On Sunday the weather eased, but by this time the fire size had increased to 45,000 ha and the perimeter was estimated to be 100 km, giving suppression forces a huge task. On Monday good progress was made with fireline construction, but the Wells fire broke away. On Tuesday the weather worsened again, with the temperature exceeding 40°C and winds swinging north west at increasing strength. A severe evening thunderstorm caused a massive southerly spread that resulted in catastrophic damage to property at Dwellingup, Holyoake and Nanga Brook. Fortunately no lives were lost due to very experienced fire crews and very competent managers. Note that no amount of airtanker support could possibly have prevented this disaster. The only thing that could have prevented it would have been low fuel conditions in the forest.

The fire was eventually brought under control on Wednesday after heavy rain fell and the weather cooled considerably. Final fire size was about 150,000 ha, of which over 40,000 had been completely defoliated (i.e., burnt by a crown fire). Figure 2 shows the extent of the fire. As well as property damage, there was large scale damage to the forest cover, large numbers of mature trees as well as saplings and poles being killed outright and much internal damage caused (see Peet and Williamson, 1968). Wildlife also suffered severely. Dead kangaroos and brush wallabies were a common sight. Destruction of downed logs caused extensive habitat loss for small fauna.

At its height, something like 1000 men were engaged in combating the fire, with personnel from the timber industry, local farmers, bulldozing contractors and even the Army involved.

A post-fire review team, led by noted forester W H Eastman, undertook an intensive study of the management of the fire and of the fire effects in the forest. Actually they also included information from the numerous other severe fires in that year. The conclusions they reached with respect to fire behaviour were as follows:

The more general conclusions for forest fire management were:

On fire suppression, the findings were:

However, it was acknowledge that no matter what improvement of fire fighting equipment took place, the key to successful mitigation of fire damage was control of fuel loads in the forest.

As a result of the review, major investments were made in a VHF radio system, improved burn planing , better crew trucks and equipment, and a major new fire research program was initiated. Over the next 10 years about 400 experimental fires were measured in jarrah and in karri forest to quantify fire intensity with variations in fuel and weather. A joint program with CSIRO produced a world first in aerial burning,. 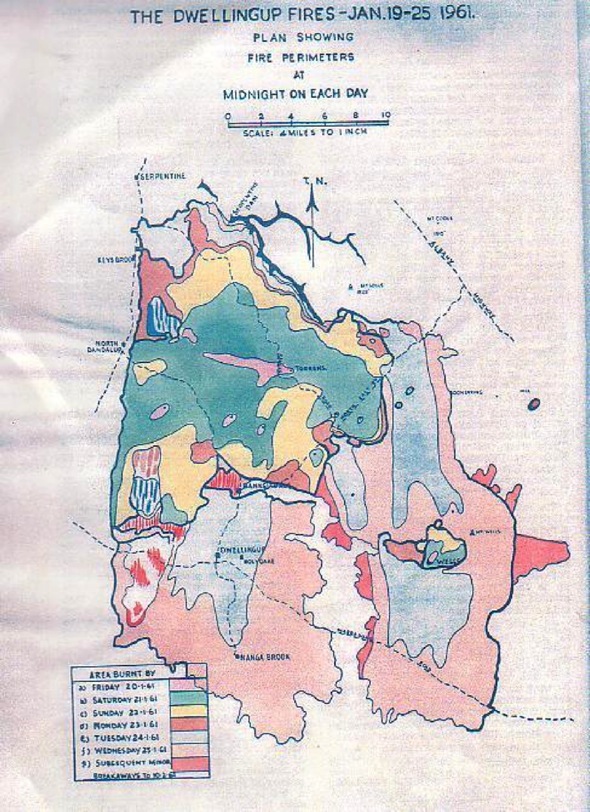 The principal conclusion from the review was that the key to avoidance of major forest fires in WA forests was maintaining the forest in a generally low-fuel condition. Despite the obvious need for improvements in several aspects of the fire suppression system, it was recognised that under severe weather conditions no amount of high technology equipment could control a major forest fire. Subsequent experience here and overseas confirmed this finding. Even in the USA, where the resources available are very large indeed, the fire suppression paradigm has failed. On a visit to the USA in 1978, there were over 30 ex military bombers at one airfield in San Diego fitted for water bombing. Many others were at other airfield in California. A Large Fire Organisation with these resources, which could also muster 6000 firefighters, has repeatedly failed to prevent high property damage in several disasters over the last 30 years. There is now a belated recognition there of the importance of forest fuel reduction.

The lessons learned from the Dwellingup fire provided the basis for a highly successful forest fire management system for Western Australia. For nearly 40 years we have avoided any large scale wildfires, but the system has been allowed to decline, as described elsewhere in this seminar. If we allow this situation to continue, it is certain that we will pay for it with another major conflagration. This time we may not be so lucky in avoiding loss of life.