In addition to the detailed account given below, and in the case studies reported in the WAIT Paper, several published papers listed below give further examples and information on this subject.

In 2010 the Department of Environment and Conservation published a detailed account of the influence of fuel load on fire behaviour in the 2005 Perth Hills fire. The work was carried out by N. P. Cheney, formerly head of the CSIRO bushfire research group. The following summary is taken from the abstract of his paper.

Fuels in the area ranged from 1 year-old to 22 year-old in a broad mosaic. A detailed reconstruction of the spread over two days allowed the testing of fire-spread prediction models and the examination of the effects of prescribed burning on fire behaviour.

In the absence of a prescribed burning program and assuming the area had not been burnt for 20 years it was estimated the fire would have burnt into the outer suburbs of Perth with the potential for extensive property damage. The final burnt area could have exceeded 100 000ha, or more than three times the area actually burnt.

A comprehensive review of the Western Australian experience with bushfires in relation to fuel loads in forested land was given by Rick Sneeuwjagt in a paper entitled Prescribed Burning: How effective is it in the control of large forest fires? The paper was presented at the 5th International Wildland Fire Conference at Sun City, South Africa, 2011, and can be seen here Rickpdf .

There are many examples in WA forests where very hot bushfires unable to be controlled due to their intensity and rate of spread whilst burning in heavy fuels were readily contained once the fire ran into areas burnt under prescribed mild conditions in previous years.  The low fuel level which remains for four or more years after prescribed burning allows fire crews to safely attack the head fire and quickly bring the fire under control.

One of the best examples of these benefits occurred in 1978. Normally by April the peak fire danger has passed and landowners are safely carrying out burning operations on private property under permits issued by Local Authorities. This was the case in April 1978 in the South West where about 100 burn offs on private property were in progress.

From April 1st to April 3rd, Cyclone Alby was located about 700km north west and then west of Exmouth and expected by the WeatherBureau to decay into a rain bearing depression as it moved further south. Unexpectedly, on April 4th the cyclone moved extremely rapidly southwards and across the South West catching everybody by surprise. Gale force winds in excess of 100km/hr caused 90 fires in the south west to escape and spread rapidly.

The following extract is taken from the Forests Department Annual Report for 1978, and well illustrates the value of a forest estate with low fuel levels when extreme fire weather conditions occur, as they do from time to time

On 1 April 1978 Cyclone Alby was located over the IndianOcean, about 700 km west-north-west of Exmouth. The accompanying map shows the southward movement of the cyclone on 2 and 3 April, its path roughly parallel to the west coast. On 4 April the cyclone moved rapidly across the southwest corner of the State past Cape Leeuwin, accompanied by gale-force winds. Considerable damage resulted from wind and from fires that escaped mainly from incomplete burning-off on private property. Many buildings were destroyed and there was widespread fire damage to farming properties. Several towns were threatened during the peak of the cyclone.

As the cyclone approached Cape Leeuwin gale force winds developed with gusts in excess of 112 km/h. Dwellingup, Kirup and Pemberton recorded over 100 km/h between 1600 and 2100 hours. Several centres in the south-west registered new records, with gusts between 130 and 140 km/h (ref.Bureau of Meteorology monthly weather review, Western Australia, April 1978).

Figure 1. Movement of the cyclone 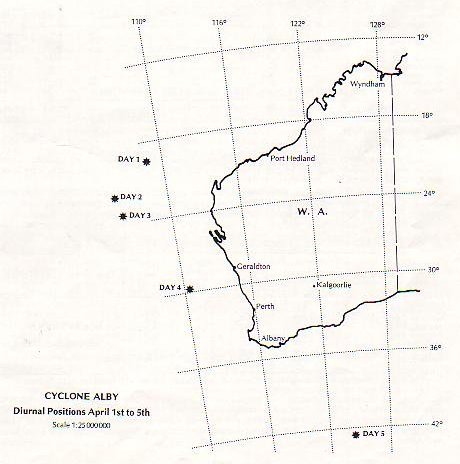 Most of the fires accompanying the cyclone escaped from burning operations on farmland. Many of these burns had been carried out one to two weeks earlier and would have been safe under normal April weather conditions. Other fires escaped from burns lit on 4 April and their escape may have been prevented had it been possible to provide earlier warnings of strong winds. The origin of 90 fires which burnt in or near State forest is given below. These fires were generally within 10 km of State forest boundary. 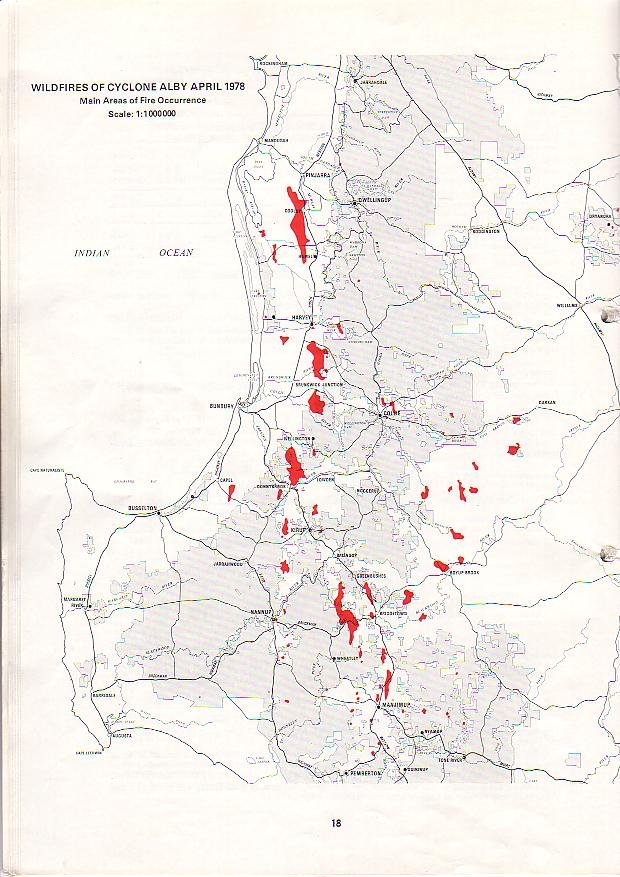 The total area burnt was over 50,000 hectares of which almost 44,000 was on private property with the balance on State Forest. Seven of these fast spreading fires which originated from private property escapes entered State Forest but were controlled relatively easily due to low fuel levels, the result of prescribed burns over the previous 3 years. This allowed Forests Department crews to be released to assist in the control of the many fires burning on private property which took several days to control.”

2. Another Example of the Effectiveness of Fuel Reduction Burning

The map below shows a graphic example of the value of fuel reduction burning in minimising the impact and extent of wildfire. The area of State forest immediately north of Donnybrook townsite, WA, is shown in yellow crosshatch.  It was burned in October 1977 by the then Forests Department. 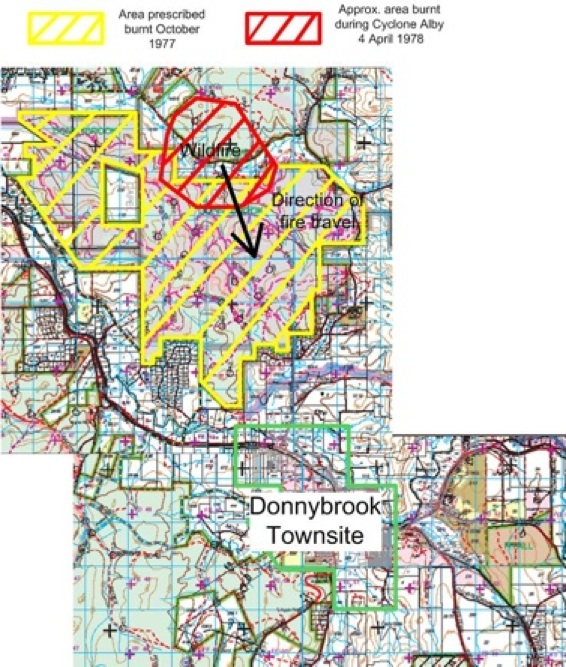 In early April 1978 there were a series of wildfires in the south west of WA caused by the errant tropical cyclone Alby. One of these started north west of the town, driven by 130 km/hour winds. As the map plainly shows, the town was directly in the path of the fire, which is shown in red on the map. Donnybrook at the time had a population of about 4,000 persons.

The fire ran into the recently burned forest and was easily controlled, thus removing the threat to the town. Had this area contained heavy fuels, the fire would certainly have engulfed the town, with likely heavy loss of life, as well as property.