Unfortunately there will always be bushfires. No matter what we do, fires will start from lightning strikes, human carelessness, accidents or arson. Our response, therefore, must be to mitigate the damage that bushfires can cause.

If you live in a rural or semi-rural area, or a country town, you need to know if you are located in a fire-prone zone. Your Shire council will have maps showing where these zones are located. In a fire-prone area, the Shire has responsibilities under the Bush Fires Act to ensure that certain procedures, such as installation of firebreaks, is carried out and that standards of fire preparedness around homes are adhered to.

How Do Houses Burn?

The common perception is of a bushfire destroying a house in a blaze advancing in a front towards the building, which then starts to burn anywhere it is inflammable. That may happen sometimes, but the real hazard for a house is an ember shower from the fire. A shower of burning embers, usually driven by strong winds, will seek out any crevice in inflammable material and lodge there. A house with exposed eaves is particularly vulnerable to this. Boxed-in eaves are very important in denying embers lodging places.

Bushfires generate overwhelming showers of burning embers and pieces of burning bark. Burning pieces of bark can be carried several kilometres ahead of the main fire front and start “spot fires” in unexpected places. For this reason it is important that all parts of the landscape are maintained in a low fuel condition. Odd patches of bushland scattered among housing developments are the sort of places that will easily catch fire from these embers and quickly generate even more embers. This does not mean a “scorched earth” approach everywhere, as a fire in fuel that is less than 4 years old can be easily and safely controlled under most conditions.

The essential thing is to prepare your property well in advance of the fire season. You need to be bushfire-ready by the end of October in Western Australia. All leaf litter needs to be cleared up and inflammable shrubs around the house to a distance of at least 20 metres, and maintained that way until April the next year. Trees continue to shed leaves all through the summer, especially eucalypts, and they keep lodging in gutters. The gutters need to be cleaned out every month or so if there are trees close to the house.

DFES provides good advice along these lines in its publication below.

You may also like to look at some good advice in the publication below, which is obtainable through your local library. 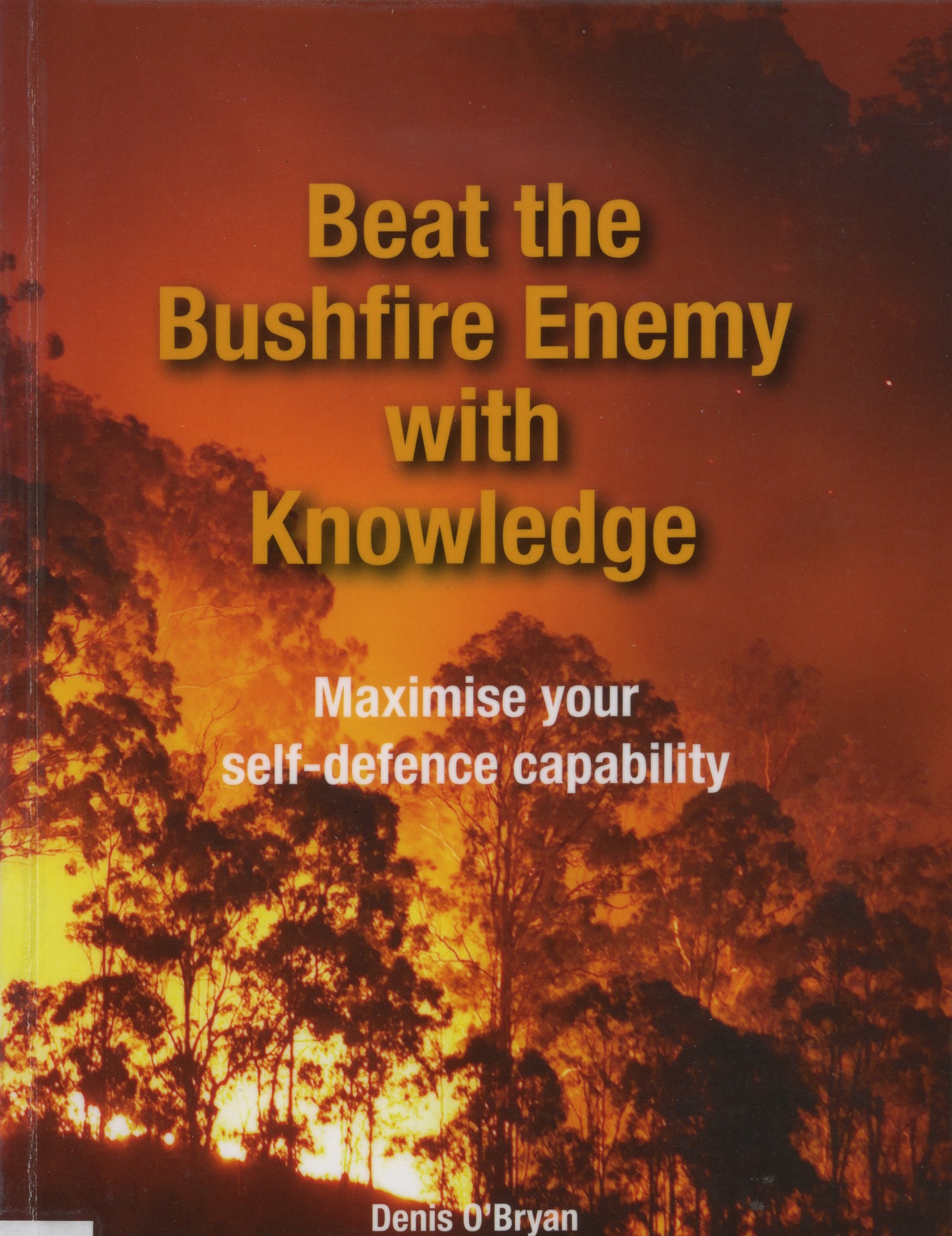 A very comprehensive survey of the issues surrounding bushfires in Australia is given by Joan Webster in her book The Complete Bushfire Safety Book (Random House Australia 2000).  Much of the examples and data she quotes come from Eastern Australia, and especially from the experience of the 1983 Ash Wednesday fires, but it’s all just as relevant to Western Australia. 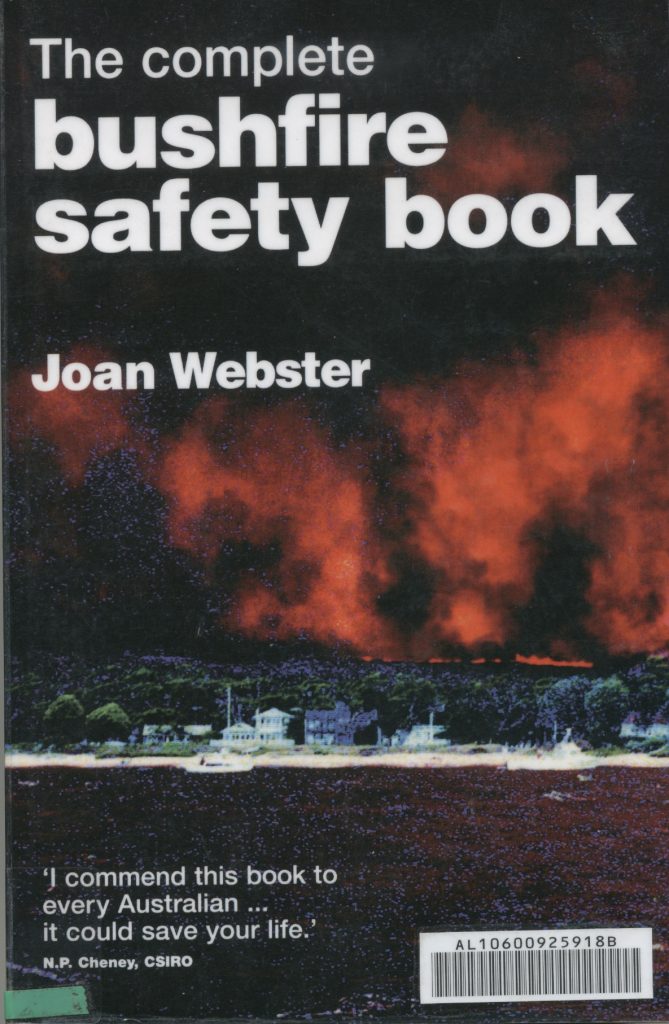 In a rural or semi-rural area, where the impact of a bushfire could be severe, a fire plan should be prepared and discussed with the whole family before the fire season. Among other things the plan should state whether you intend to stay and fight a fire or bale out early and risk the house burning down. The plan should also identify the best part of the house in which to take refuge in the event disaster happens and you cannot escape the fire and the building seems likely to burn. It should also list the items you would need to take in the event of an evacuation.

It is very important that children should be aware of the danger of bushfires and have some idea what to do in case they encounter one.

If you have a pool, a small petrol-driven water pump would be a good investment. But be sure to run the pump at, say, monthly intervals to ensure that it is fully operational. An electrical pump may not be any use as two things will stop in an area covered by a bushfire: the electrical power and the water supply. You need to be independent of these.

If you are in a rural area and have some space around your house, some people advocate investing in a dugout, or something that can act like a dugout, in which to take refuge in a dire emergency. In some circumstances, for example in a hilly area with poor road escape routes, this might be justified. However, having a dugout does not mean the other precautions should be ignored.

With regard to whether you should flee or stay and fight, providing you have followed DFES advice on keeping your house well cleared around, you have basic fire fighting equipment, and you are reasonably fit, CSIRO research has demonstrated that staying and fighting the fire is usually successful.

The Ash Wednesday fires in south eastern Australia showed that 66% of unattended houses were lost, while 90% of those where someone stayed and fought the blaze were saved. Whether an unattended house is burnt or not depends crucially on its vulnerability and the intensity of ember showers near it.

Do not rely on the cavalry arriving to save you. You will have no idea whether they have the resources to do so, and they may well be prevented from accessing your area by the fire anyway.

What to Do in the Event of a Bushfire

If you are caught in the open by an approaching fire front, you are in a very dangerous position. The risk depends on the type of fire. Grass fires are faster moving than fires in bushland, they throw less embers and the actual fire residence time is far less than fires in bush. Running away from either type of fire is hopeless. A grass fire can move much faster than you can run. The threat comes from two sources: smoke inhalation and radiant heat. It is vital to take shelter from radiant heat behind some solid shield. Even a hole in the ground has saved people in some cases. Finding a bare patch of soil where the fire cannot reach you will enable you to survive if you can avoid the radiant heat somehow. Close to the ground is a zone of clearer air to assist in breathing.

So far as defending a house is concerned, the first thing, on becoming aware that a bushfire might threaten your house, is to determine where the fire is and in what direction it is heading. Bushfire news is broadcast on ABC 720 at frequent intervals. You can also go onto the internet and check out the DFES website, which also carries current bushfire information. Be aware that the site may well crash if a lot of people have the same idea. This will enable you to assess the level of risk you face.

If you can see that you may well be under threat, then check your fire plan and implement whatever measures you had decided upon. Firstly, check on the location of all family members and decide if you need to fetch them from somewhere too be safe. If children are at school they will be a priority for fire suppression actions by the Bush Fire Brigade or DFES.

If you have decided to defend your house, fill up all your buckets with water, and possibly the bath also, while there is still water available. Make sure any vehicles have the windows closed and are parked ready to move if an evacuation is necessary anyway. Collect the items you had previously listed as being needed to take with you. Gather your pets inside, well dogs and cats, anyway. If you have horses, that’s a difficult situation and you should have decided what to do about them in your fire plan.

Close all doors and windows and stay outside ready to douse any embers that land in the vicinity. Always wear protective clothing: good solid footwear, long trousers and long sleeved top.  Fighting a bushfire in shorts, singlet and thongs is asking for trouble. Radiant heat can kill anyone so attired.

The ideal equipment is a packspray, so you can move freely around the house looking for ember-generated spot fires. Without that, a wet hessian bag or even a branch off a tree are useful to beat out a fire.

Again: do not rely on the cavalry coming to the rescue. Aim to be self reliant.

Dangers of a Last Minute Evacuation

It is very dangerous to decide to evacuate at the last minute, when a bushfire is pretty well all around you. There will be a lot of smoke and noise and the situation will be quite confused. It may be that the fire has already blocked a route you had previously selected. The smoke would prevent you from finding out until it is too late. In the 2003 Victorian fire disaster, many people lost their lives fleeing at the last minute along roads obscured by smoke and with dense scrub on road reserves sending flames across the road itself.

You must think the situation through carefully before the fire season, so that decisions are made calmly, not in a panic and lacking information on exactly where the fire is at the time.

If you do decide to flee in a car, head for an area close at hand where you know the fire cannot reach you, such as a sports oval, or perhaps a quarry where there is no vegetation at all. Cars are safe refuges only when in areas entirely clear of any combustible material. If you are caught in a forest area with heavy fuel around, the flame residence time is at least 5 minutes and cars can ignite and burn before conditions are bearable outside. A woollen blanket is a useful thing to have to protect you from radiant heat, as it doesn’t burn easily, unlike blankets made from artificial materials. An aluminium sunshade over the windscreen is also useful. If you are using a utility, any combustible material in the tray will ignite the vehicle quickly, so a ute is not a good vehicle in which to trust your life.

In any case, when travelling during a bushfire you must drive slowly and you must have your lights on, and keep the windows closed. Never, never try driving through a wall of flame.

Your local volunteer bush fire brigade (BFB) is a vital part of the fire management team in your locality. They are your friends and neighbours who give their time (and risk their lives) to prevent bushfire damage. You need to make their job as easy as possible by doing your part to keep fuel loads low on your property. Heavy fuel loads make it much more difficult for them to control a bushfire – and much more dangerous, too.

In addition to fighting any local bushfires, the vollies carry out fuel reduction burns on bush reserves in their area, and also do burns on private property in cooperation with the landowner.

The vollies are always looking for new members, so if you are fit and have the time, consider joining them.

PAW/DBCA are often criticised for smoke from their fuel reduction burning drifting over urban or peri-urban areas. However, the burns are being carried out to protect life and property, as well as preventing severe damage to forests ands other ecosystems from high intensity bushfires. A temporary bit of smoke is a small price to pay for that protection. Remember, in a bushfire there is vastly more smoke generated than in a low intensity fuel reduction burn.