Over the last 15 years there have been several inquiries into the bushfire situation, usually stimulated by some disaster or another. It seems that only a disaster will make us confront what should be obvious to us all. Some of these were national in nature, carried out by committees or consultants from the Senate, Council of Australian Governments, or the House of Representatives, or, in one notable case, the Royal Commission into the 2009 Victorian bushfire disaster. There were previous inquiries into the 1939 Victorian bushfires, the 1983 Ash Wednesday fires, the 1967 Tasmanian disaster and the 1961 Royal Commission into our own annus horribilis.

What is amazing about all these inquiries is that no long term improvement in fire management has resulted, with the rare exception of the 30 years or so after the 1961 fires in WA. It seems to be human nature to be concerned in the immediate aftermath of a destructive bushfire, but then the desire to fix things fades over the next few years – until the next disaster. Will we never learn?

The BFF has been very active in making submissions to all the national level bushfire inquiries and the Victorian Royal Commission. On each occasion we have strongly promoted the idea that fuel management is the key to mitigating the effect of bushfires and that broad acre prescribed burning is the most suitable way to do this. Of course, we do not underestimate the need for adequate fire detection systems and suppression forces, but long experience has a shown that reliance on suppression alone is an approach that has failed all over the world. This was once again demonstrated in the 2017 Californian bushfires.

It is noticeable that most of these inquiries have been undertaken in the wake of bushfire that caused significant life or property losses. People in general seem less concerned about the damaging effect of high intensity bushfires on forests, although these are very important in fact.

The Roleystone fire in 2011 caused severe property losses and could well have been much worse than it was. It was one of several damaging bushfires in the Perth Hills, such as Parkerville, Stoneville and the 2005 Perth Hills fire that came out of State forest.

However, the Roleystone fire did stimulate the Government of the day to have the event reviewed by Mr Keelty, the former AFP Commissioner, although with rather limited terms of reference. The BFF again made a submission and held discussions with Mr Keelty. His report, entitled Bushfire Management – A Shared Responsibility, led to some significant institutional changes.

The Government called on Mr Keelty again in 2012 to enquire into the Margaret River bushfire that resulted in major property losses.

There were extensive and very damaging forest fires in 2015 at Northcliffe and Boddington, when the shortcomings of the DFES ability to manage large bushfires were exposed. However, no public report on these issues is available.

The 2016 fire season was particularly bad, with a very large bushfire at Esperance and smaller one at Yarloop that destroyed the town. Four lives were lost in bushfires in that year. It became clear at last that the whole fire management system in WA was was failing, so the Government established a new inquiry, with wide terms of reference, undertaken by a fire management expert Mr Euan Ferguson. 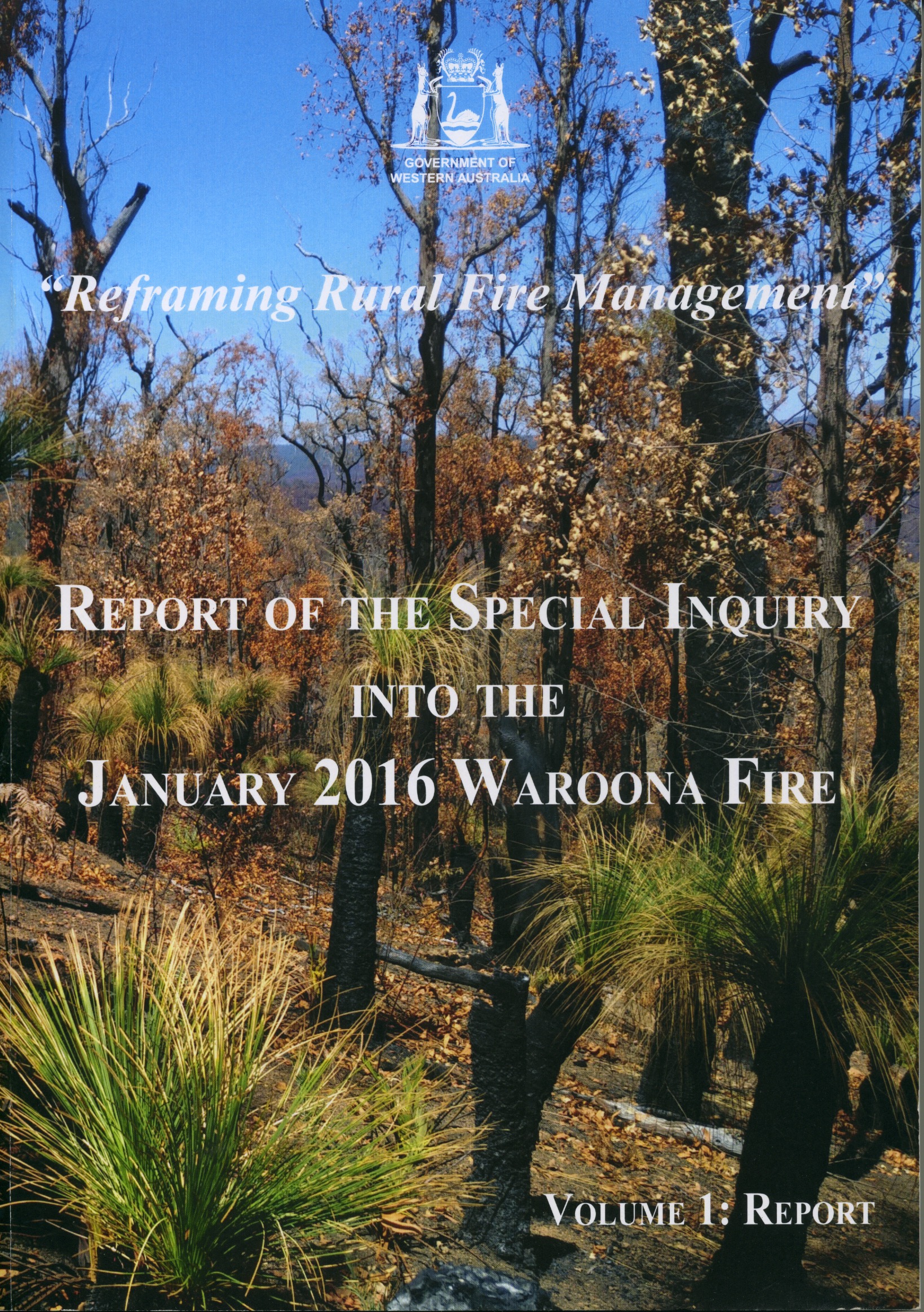 The Ferguson Report – A Landmark Result For Rural Fire Management

Euan Ferguson deserves praise for the clear and practical outcome of his inquiry, in the face of undoubted strong opposition from DFES and the empire-building United Firefighters Union.

From the perspective of The Bushfire Front, Ferguson’s main recommendations for improvement of rural bushfire management are:

We strongly support all these recommendations. The creation of a Rural Fire Service is the crucial factor that must be accepted by Government. However, it will be effective only if it has the right policies, culture and staff. The latter will be problem initially due to the need to counterbalance the destructive policies of several agencies and Local Governments over the last 15 years. Nevertheless, it is vital that the State bite the bullet and proceed with it.

The nature of the agency, whether a stand alone organisation or a sub-agency of DFES is also critical point. Ferguson gives the Government these two options, although he firmly comes down on the side of a new stand-alone agency. We agree. DFES should be totally removed from rural fire matters, other than assisting with firefighting as part of interagency teams. After all, the current mess is almost entirely due to DFES mismanagement over the last 15 years. For example, the need for fuel reduction burning on private land, and on land held by several Government agencies, has been ignored, or even actively discouraged by DFES. This is not just our opinion; it is what members of rural fire brigades have been telling us for years. The well-known DFES bias toward bushfire response rather than prevention and fuel hazard management is another major reason for removing it from the rural area entirely.

Funding of a new agency is clearly an issue for the Government. However, since a substantial part of the income for the Emergency Services Levy comes from rural regions, it would be logical, and only fair, to use part of the ESL funds to establish and run the new agency.

At the time of writing this comment, the WA government has made no commitment to implementing Ferguson’s recommendations. We have written to the Premier and advised him that there will be a massive backlash in country areas if there is “another Yarloop” or “another Esperance” and the Ferguson report is still languishing. We are calling on interested people from all walks of rural life to contact the Premier and let him know that positive action is needed.

The time for tinkering at the edges is over. Radical institutional, policy and cultural changes are required if rural West Australians and their environment are to be protected from the ravages of destructive bushfires … and the Ferguson Report has provide the springboard from which good changes can be made.

Bushfire Management Must Be Fixed

A proposal by the Bush Fire Front Inc., March 2016 Introduction The 2016 Waroona/Yarloop fire is the latest in a growing number of serious bushfires in the South west of WA. The graph below demonstrates this clearly. Current bushfire arrangements in WA…

The Keelty Inquiry into Bushfires in WA. A submission from The Bushfire Front Inc April 2011 Summary Bushfire management can be looked at in two ways: (i) the efficiency with which bushfires are tackled and suppressed after they start; and (ii)the measures…