The smoke that arises from bushfires, whether it comes from prescribed burns or from wildfires, is a controversial subject in Western Australia. Every time the metropolitan area is affected by smoke drift from a prescribed burn in nearby forests there is an outcry in the media. Paradoxically, there is little comment on smoke from a wildfire, even though it is much thicker and often long-lasting: it seems to be accepted that this will happen.

To some, smoke is simply a matter of air pollution, and therefore should be stopped. To others, it is an inconvenience, especially if they suffer from respiratory disease. In the latter case it is possible that smoke particulates can cause increased difficulty with breathing. However, there are well-known steps sufferers can take to alleviate the breathing difficulty.

Dense smoke does reduce visibility. There have been many instances of bush fire smoke causing temporary problems at airports.

However, bush fire smoke in the Australian environment is not air pollution. Smoke is a natural, and necessary, part of our environment. Native vegetation has evolved in the presence of fire and the landscapes we see today have been moulded by fire. Some plants actually depend on periodic fire for reproduction, and almost all species have some sort of adaptation that enables them to tolerate our fire-friendly climate. Many native plants are also fire-friendly and contain essential oils that are highly inflammable. This feature increases the intensity of a fire and makes forest fires in native vegetation Australia faster-spreading than similar fires in other countries.

After they arrived in Australia some 40,000 years ago, the Aboriginal people began to use fire in a systematic way to manage the vegetation and smoke became a more or less constant part of the environment of the continent. Before them, it was lightning that started the fires in a more haphazard way, but frequently all the same. All the reports of the early European explorers mention the smoke of Aboriginal fires as a feature of the sky in Australia.

It is clear sky that is unnatural in Australia, not smoky skies. Essential land management activities like prescribed burning should not be governed by misguided attitudes toward smoke. 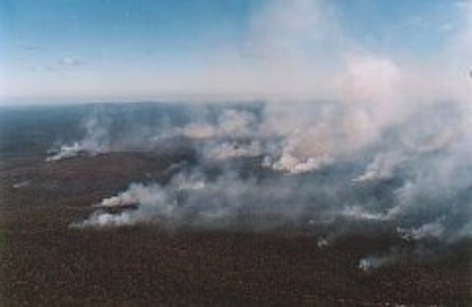 A prescribed burn in progress 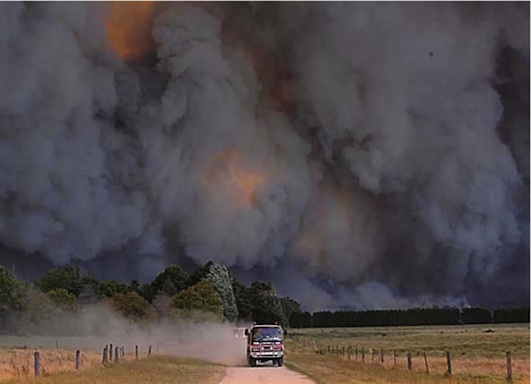 How about this for emissions!

The second answer is that there are no net emissions from prescribed burning. It is a carbon neutral activity because the understorey vegetation, which constitutes most of the fuel consumed in a prescribed burn, regrows vigorously after a burn and takes back from the atmosphere the carbon previously emitted. This is a natural cycle that has been ticking over for millennia.

In the last 20 years, smoke management has become an important issue. Smoke from fuel reduction burning has drifted over the metropolitan area on a number of occasions and prompted public concern over air pollution. Despite careful planning to avoid this event, some smoke drift has occurred, mainly due to unforeseen wind changes.

Strict guidelines have been evolved to minimize the risk of this occurring, but the downside of these guidelines is that it is now extremely difficult for DEC/PAW/DBCA to carry out fuel reduction burns in the region immediately to the east of the city. As a consequence, fuel loads in that area have built up to dangerous levels. The Bushfire Front is certain a major disaster, on the scale of the 2003 Canberra fires, or even worse, could happen here if action is not taken to reduce the fuel loads.

The issue has reached a point where it has become a stark choice for city dwellers; either accept a certain level of smoke drift over the city during the spring or autumn burning season, or endure much heavier levels of smoke and the social and economic consequences of a major bushfire disaster.

Smoke and Your Health

Some have argued that smoke from the burns poses a threat to public health. This is highly debatable. It is a fact that air pollution monitored by the Department of Environmental Protection has shown that pollution as a result of smoke has exceeded target levels only for a few hours on one or two occasions each year over the past 10 years. While there may be some inconvenience to certain groups, such as asthma sufferers, they have the means to alleviate the discomfort and can avoid contact with smoke, if warnings are provided.

In May, 2003, the Department of Environmental Protection released a report on a major study of air pollution in Perth in relation to public health (DEP Technical Series 114, Research on Health and Air Pollution in Perth: Morbidity and Mortality: A Case-Crossover Analysis 1992-1997). This report did not identify smoke from fuel reduction burning as a significant cause of air pollution in Perth. Rather, existing air pollution concerns centred around emissions from motor vehicles and industry.

It is unfortunate that public concern about occasional instances of smoke from burns over Perth is stirred up by unbalanced media reporting. The common practice of only reporting one-sided comments from parties opposed to fuel reduction burning is not in the public interest.

Air pollution and health impacts as a result of wildfires has also been studied in Sydney. According to the NSW Department of Health (HARP Newsletter No 2, December 1994) the January 1994 bushfires did not result in any significant increase in asthma hospital admissions at the time. The January 2005 Perth Hills bushfire which blanketed Perth with dense smoke for a whole day also did not cause an increase in hospital admissions because of asthma.

Smoke is a natural and inevitable part of the Australian environment and we just have to live with it.