Welcome to the website for the Bushfire Front  Inc (BFF) of Western Australia.

The BFF advocates better management of fire in WA, especially on forested lands, to reduce the impact and severity of bushfire damage.

What is the Bushfire Front?

We are practical bushfire specialists, with hundreds of years’ accumulated experience in preventing bushfire damage to people, property and forests. Each of us has worked in bushfire prevention, bushfire science, fire control planning, administration or operations, some of us for over 35 years.

The Bush Fire Front was formed in 2002 when it was realised that the standards of fire management in Western Australia had slipped to a dangerous low. We recognised the worst possible combination of conditions:

* The climate was getting drier and possibly hotter, while bush fire fuels were no longer being effectively reduced.

* There was a massive expansion of the population into bush fire vulnerable areas like the Perth Hills and the Leeuwin-Naturalist region, at the same time that fire fighting manpower was declining.

We detected a dangerous change in attitudes. The government was complacent, or denied there was a problem.  The community was ill-informed about fire, or believed that if a fire came they would be OK, as the firefighters or the water bombers would turn up. This ignores the fact that water-bombers are ineffective against crown fires, and cannot operate at night.

Since 2002 the Bushfire Front has made strenuous efforts to raise the interest of the authorities in improved bushfire management, and to educate communities. We have written dozens of submissions, newspaper articles, given papers to conferences, met with Ministers and senior agency staff. We have organised community forums and supported bushfire brigades and Bush Fire Ready groups.

What is Our Concern?

The standard of fire management in WA has declined to a dangerous level. Unless urgent action is taken to improve it, WA is headed for a major fire disaster, and one much worse than the 2010 Toodyay fire that destroyed 38 homes, or the Yarloop disaster where lives were lost and a town destroyed.

We came perilously close to a Canberra-style disaster in the Perth Hills in 2005. We learnt nothing from that event, so we had the 2011 Roleystone disaster, and then, soon after, the Margaret River fire. In 2014 another damaging bushfire occurred at Stoneville. In 2015, we saw major bushfires in forest country at Boddington and Northcliffe. The latter caused huge damage to beautiful regrowth karri forest. The total area of those fires was almost as great as the area burnt in the 1961 fire disaster.

The problem is the greatly increasing number and severity of serious bushfires in Western Australia. For example, here is the graph showing the extent of bushfires in our Crown forested areas in the South West of the state, together with the annual area of fuel reduction (prescribed) burning. 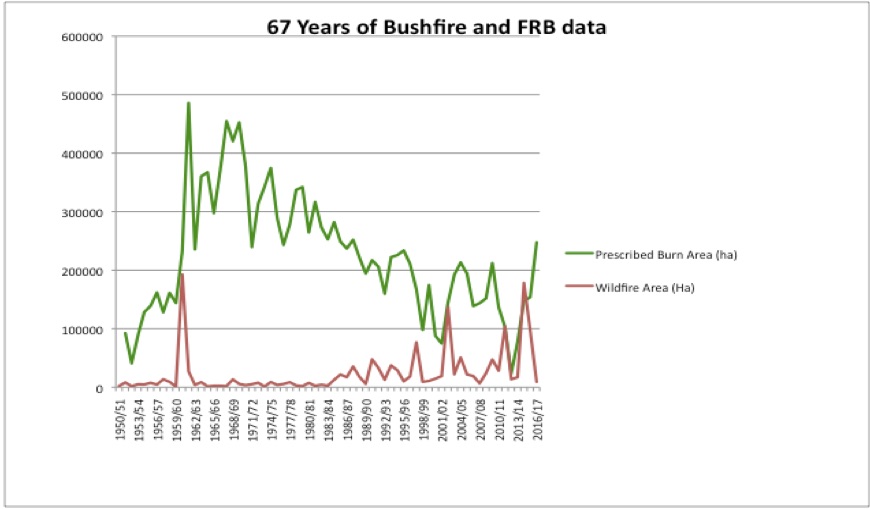 The spikes caused by the disastrous 1961 fire season and the large bushfires of recent years can be seen clearly.

We do not have to endure bushfire damage like this. Yes, bushfires will always start from one cause or another, but the damage can be prevented by controlling the fuel load across the landscape. In bush country the only practical way of controlling the fuel load is by low intensity prescribed burns. We know this works because vigorous application of the technique in State forests virtually eliminated major bushfires for 30 years after the disastrous 1961 bushfires.

A major review of the State’s fire management undertaken in 2016, the landmark Ferguson report, concluded that the current system has failed and that fundamental changes are needed. So far, by mid 2017, the Government has failed to take effective action to address this critical situation.

The State Government failed to take effective action to address this critical situation for two years afterward. Finally, in 2018, it announced that it accepted the main recommendations made by Ferguson and would set up a Rural Fire Division (RFD) within DFES, with a brief, inter alia, to manage fuel loads on private land.

This is an undoubted step forward, and a welcome one, although it is not ideal, from the perspective of the Bushfire Front.We would have preferred that the RFD be an independent body with independent funding, along the lines of the former Bush Fires Board, and so freed from influences that have been so destructive in the past. However, we do see some signs of a change in culture within DFES and hope that this change will be sustained.

The RFD is to be funded by an increase in the Emergency Services Levy. This occurred in Shire Rate notices for 2018. We note that, while some functions, and some staff, will move from DFES to the RFD, there was no reduction in the level of funding for DFES.

What Do We Want

The Bushfire Front believes it is essential that Western Australia makes drastic moves to implement a more effective fire management system across the State. The system needs to encompass all land tenures: Crown land, uncommitted Crown land, aboriginal land tenure, and private land. It must also ensure that all government agencies, State and Commonwealth, fully meet their obligations to the State-wide system.

* Minimise undesirable impacts on the environment.

* Be based on credible science and practical field experience.

Such a system must have widespread political, community and media support, and much improved commitment of all levels of government to better fire management.

Who Are We Trying to Reach?

All citizens of the State are affected in some way by how well we manage the bushfire situation. Whether you are involved in the management of extensive areas of bushland in Western Australia, or live in rural or semi-rural areas, or even live in suburbia (where you may have been inconvenienced by bushfire smoke), you need to understand the bushfire management issues we face in this State, and what you can do about it. This website is about promoting that understanding and gaining support for improvements in a system that is currently failing.