People living in country areas are generally well aware of the hazards presented by bushfires, but there are some parts of the State, such as the Leeuwin-Naturaliste Ridge, where normal farming activities have been replaced to a large extent by hobby farms. Often these are not occupied full time and the landowners themselves often have little knowledge (or interest) in bushfire matters. There have been occasions when a bushfire has occurred on a hobby farm block, but the owner did nothing about it himself, just expecting the local bush fire brigade to arrive and handle the situation. The hobby farmers may be concerned about bushfire but don’t know what to do about it.

There are now extensive areas of low density peri-urban developments in the Perth Hills and around places like Toodyay and Dunsborough, where a large proportion of the region is covered in native bush. The inescapable fact of life is that native bush always accumulates litter and the understory shrubs die off after a few years. Unless the residents are motivated to work hard at maintaining low fuel levels, such areas quickly become death traps, especially where there is only one access road. 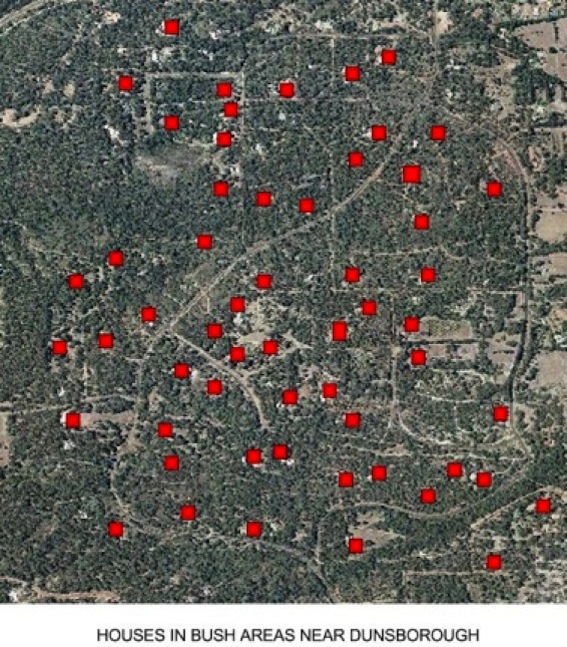 You can see that in this subdivision, there is only one main access road. If that road is cut off by a running fire, people at the end of the road will be unable to escape.

And it’s not just the landowners who need to act. The activities of several government agencies need to be coordinated with local activities to manage fuel loads, such as Landgate, Water Corporation, Defence and, of course, the State agency managing national parks, State forests and nature reserves. Through an active involvement by local government, there should be a landscape approach to fuel management. This is, in fact, the responsibility of local government under the Bush Fires Act.

Road reserves are another major problem. They are usually neglected and over the years accumulate heavy litter loads and dense shrubbery. Trying to drive through a bushfire when such shrubbery was afire caused a number of deaths in the 2009 Victorian fire disaster. IN WA the has been a swing away from periodic burning of road verges under pressure from green activists. They have tried to create the impression that roadside burning would be unlawful, but this is false. It is perfectly lawful under appropriate weather conditions and with proper provision for traffic safety.

You may like to peruse the historical information on bushfires in our Resources section on this website. See also Resources > Further Reading for useful references on this issue.

In Western Australia, it is the responsibility of local government to implement the provisions of the Bush Fires Act, which has as its main objective the removal of fire hazardous material on all land within the area, and the maintenance of a system of firebreaks to minimise the risk of a bushfire spreading. Each year, Shire Councils send out advice to landowners to clear up accumulations of hazardous litter and other materials and to install firebreaks where appropriate. Unfortunately the enforcement of the Bush Fires Act has been less than vigorous in the last 15 years or so and many Shires have backed off on enforcement. This has been due to two main reasons:

The volunteer bush fire brigades (vollies) in the past were coordinated by local government, and the whole system was built on the idea of local self-reliance and was naturally decentralised. This ethos has been eroded by the highly centralised control ethic of DFES over the last 10-15 years. Some Shire Councils have been quite happy to see DFES take over responsibility for management of a difficult issue, although the vollies have come to have a quite different view of the matter. While grateful for the greatly improved equipment made available to them by DFES (from the large amount of funds from the Emergency Services Levy), they have not been happy with the control imposed from outside.