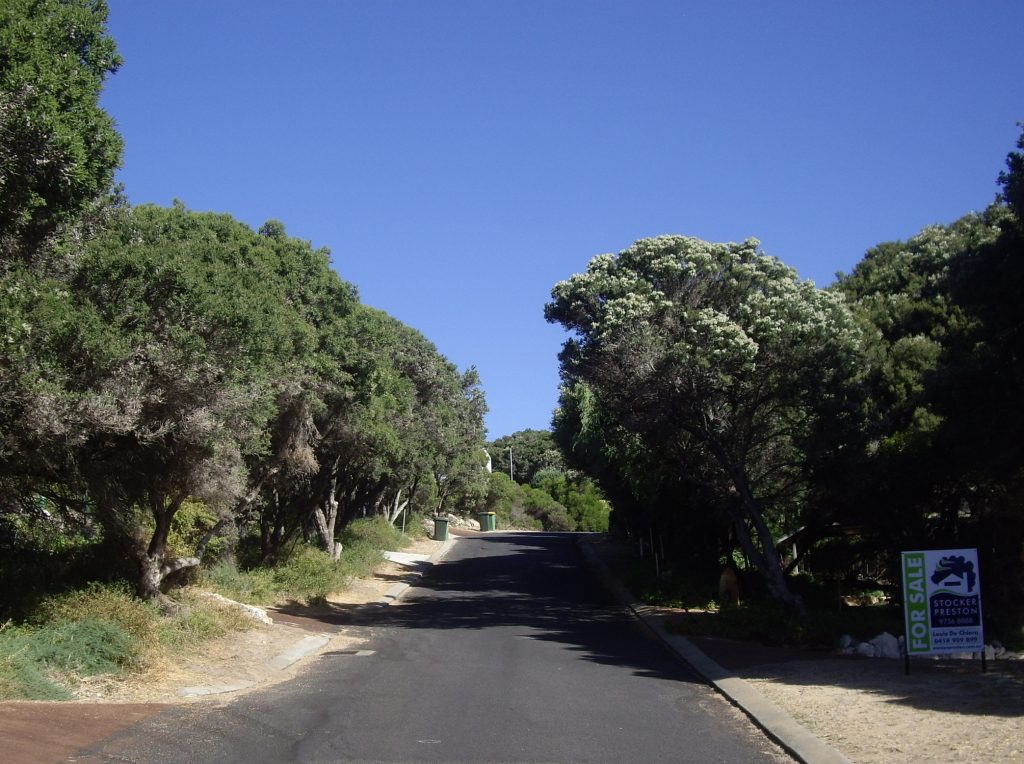 While there is a severe fire hazard in many places in Western Australia, there are several standout places where the hazards are very high, and the potential for loss of life and property is also very high. Local governments need to be planning how to expand fuel reduction activities for next spring now, to make an impact on the fire hazards in these places. It is their responsibility to take the lead on these issues.

During the fire season Yallingup has a high population of holidaymakers, tourists and surfers. The town is adjoined by dense, highly inflammable vegetation, similar to that in much of the disastrous Margaret River fire. Some of it remains inside the town perimeter, providing a torch for adjacent homes. Some homes are not fully occupied. There is only one road in and out, which, if a bushfire were to threaten the town, would be choked with fleeing cars complicating access for firefighters.

A Yallingup street –nice to look at but deadly in a bushfire.

The time to do something about this is now, before we face another fire season. So far, Yallingup has been lucky. Sooner or later the luck will run out. Continued reliance on luck could be deadly. Action is needed now to reduce fuel loads in the bushland near Yallingup.

This is quite a large area stretching from about Gidgegannup south to Jarrahdale, and includes about 20 suburbs. It carries a good cover of native forest interspersed with myriad peri-urban house developments. 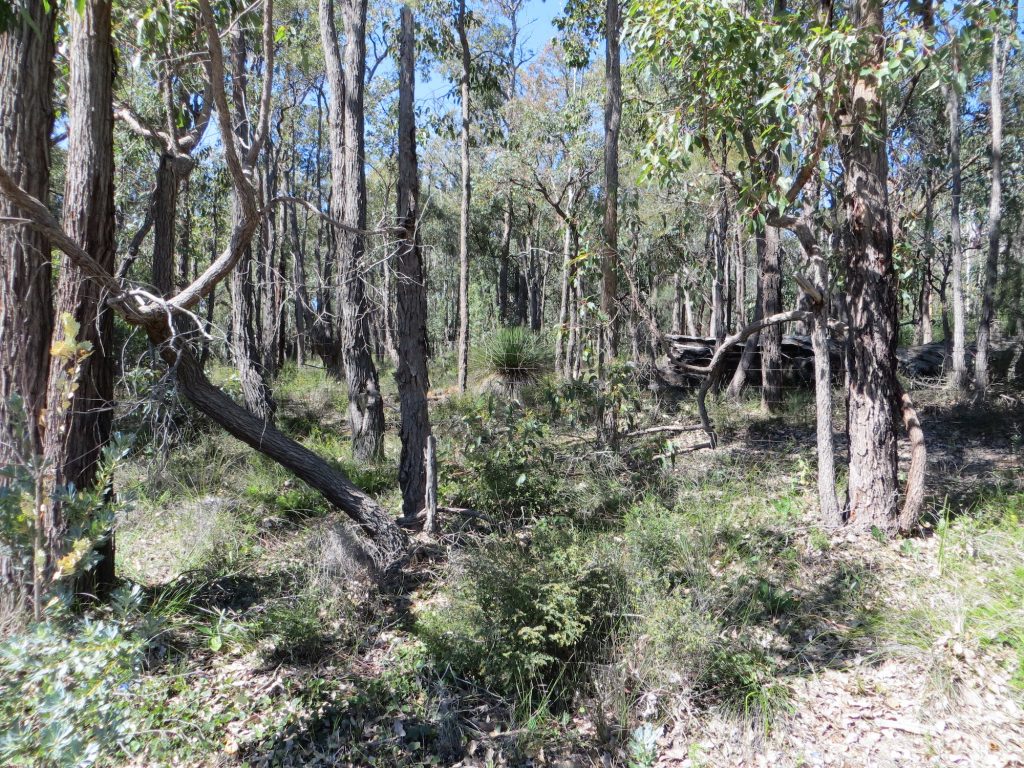 A typical bush patch in the Hills. You can see from the lack of charcoal on the bark of these trees that it has not had a fire for many years, so carries very heavy fuel.

It has a large population of people who want a “home amongst the gum trees”. Most of them just want the bush to stay the way it is and reject the notion of using fire to reduce fire hazards. Many fail to accept that the intimate mix of forest and houses presents a dangerous condition in the event of a bushfire. And there have been several damaging bushfires in the region in recent years : Roleystone, Parkerville and Stoneville. Fuel loads in the region are well known  to be dangerously high due to ineffective implementation of the Bush Fires Act by local government over many years.

Urgent action is needed by householders, local government and government agencies to address this dangerous situation.

Located on the south coast, Denmark has a shorter period of high fire risk than the other examples but still faces a deadly threat from a bushfire. It lies at the foot of a patchwork of farm and forest with a large area of dense forest to the north of the town. Due to the wetter climate along the coast, undergrowth is particularly dense and vigorous, so there is an exceptionally heavy fuel buildup around and in the town. 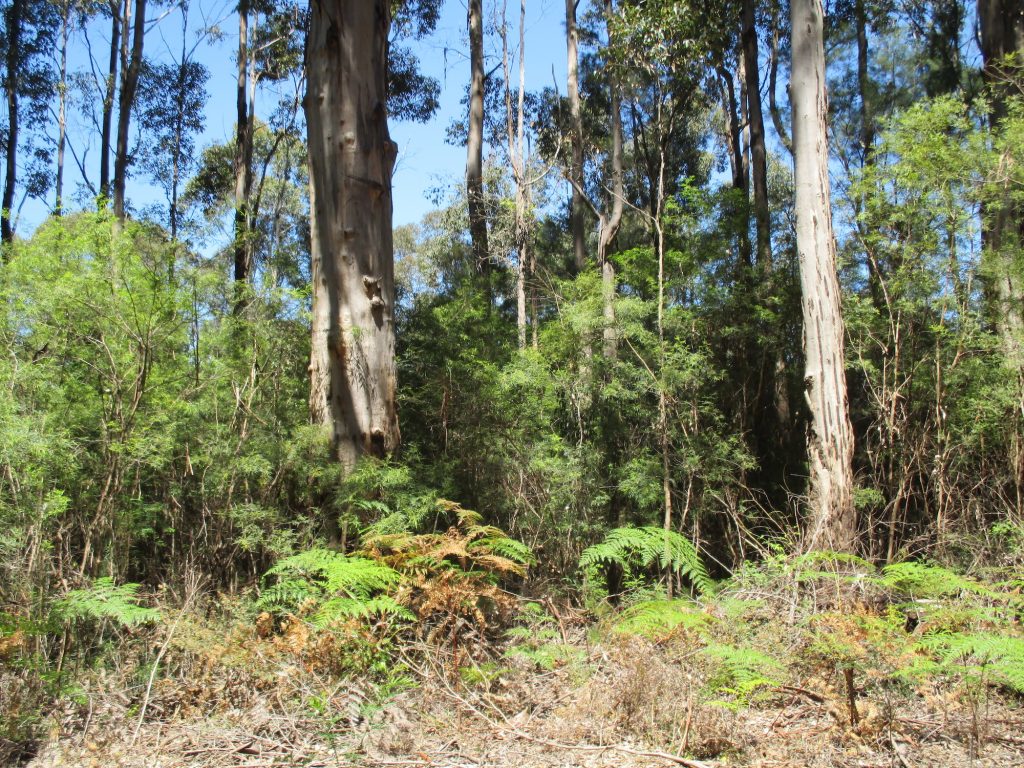 If a bushfire comes, it will be a very dangerous one. This is what it’s like in the far south; either the bush won’t burn as it’s too damp or it dries out suddenly and a fire goes like a bomb. This does not remove the need to control the fuel load. It can be done by careful selection of weather and time since rain. Here again, it is the responsibility of local government and State government agencies to take urgent action. We are aware of recent moves to remedy the situation. It will be a challenge to overcome the backlog that exists.

Like Yallingup, Denmark is a holiday town, with an expanded summer population. Many of these people come from the city and do not understand bushfires. The combination of a highly bushfire-prone area and many inexperienced people is a recipe for bushfire disaster.