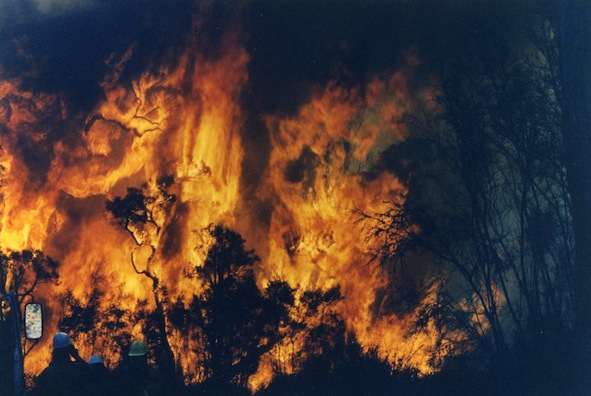 A recent article in the Sydney Sunday Telegraph paints a despondent picture: horrible bushfires are “the new normal” because of climate change. The fire season, we learn, now extends to nearly 10 months of the year, and bushfires have become so intense that they cannot be stopped before immense damage is done. According to former NSW fire commissioner Greg Mullins (now a member of the Climate Council): “The price of inaction [on climate change] will increasingly be paid in lives lost and communities shattered”.

This echoes comments made in the wake of the bushfire that destroyed the town of Yarloop in Western Australia in 2016. The conditions were described by authorities as “unprecedented”. And following the 2018 Queensland bushfires, Premier Annastacia Palaszczuk told reporters “If you want to know what caused those conditions, I’ll give you an answer – it’s called climate change”. Greens leader Richard de Natali and Greens MP Adam Brandt are both blaming the current fires in NSW on climate change.

Let’s assume for the moment that this is all correct. Put aside the views of most bushfire experts that the basic problem is a combination of drought and the failure to control forest fuels in the expectation of a bushfire. Droughts are an inevitable component of Australian climate. If you add high fuel levels the result is always uncontrollable bushfires. On the other hand, even under hot, dry conditions, fires in areas with low fuel levels are mostly easily controlled.

But just for the sake of argument, let’s accept that, thanks to climate change, the bushfire threat in Australia is now completely out of hand and deteriorating by the day. So what is to be done?

Simplifying things a little, there are broadly two options for responding to this “unprecedented” bushfire scourge.

The first is: “Fix the Climate”.

This approach comes primarily from environmentalists and The Greens and their supporters. Their plan is to fix the bushfire threat by fixing the climate. This will be accomplished by reducing/eliminating emissions of CO2 into the atmosphere, which in turn will be accomplished by shutting down the coal industry, generating power by wind and solar instead of fossil fuels, switching to electric vehicles, and so on. The outcome of these measures is presumed to be a significant reduction in atmospheric CO2, and a return to cooler, wetter and less windy weather across Australia. As a result the bushfire threat will be ameliorated.

Not surprisingly, the ‘Fix the Climate’ option seems attractive to most people. Everybody wants milder summer days, more winter rain, lighter winds and no cyclones, and if at the same time the bushfire threat diminishes, that will be a welcome bonus.

However, there are two critical drawbacks to this approach. The first is that it is not supported by climate science; no link has ever been established between global warming and drought. On the contrary, increased temperatures lead to increased rainfall, not the other way around. More importantly the promised outcome cannot be achieved overnight. Indeed, it is likely to be 20-30 years before today’s reductions in CO2 emissions will fix the climate. Over those years we will continue to be faced with lives lost and communities shattered by unstoppable bushfires.

However, those who promote Fixing the Climate as the solution to our bushfire woes are well aware of the latter drawback. They also know what must be done to keep bushfire damage at bay while we wait for the falling atmospheric CO2 factor to cut in. This is to massively ramp up the nation’s firefighting capability, especially to invest in a greatly enlarged fleet of water bombers.

Fixing the climate so as to fix the bushfire crisis is particularly popular with the authorities. Being able to blame the climate for unstoppable bushfires is a politically-beautiful strategy: it absolves Ministers and agency bureaucrats of any accountability.

The second option is to “Fix Bushfire Management”.

This requires governments to move away from the current approach (based on putting bushfires out after they start) and adopt an alternative approach. This will focus on reducing bushfire intensity, thus making fires easier, safer and cheaper to control.

The key strategy is to shift investment from fire suppression and fire recovery into preparedness and damage mitigation (including fuel reduction burning). The outcome of this revised policy will not be fewer fires, but fires that are smaller, less intense and thus easier to suppress.

Those who support the second approach and promote the adoption of a bushfire policy that focuses on preparedness and damage mitigation, recognise that this also has advantages and disadvantages. The biggest advantage is that the benefit is immediate. Instead of waiting 30 years for the climate to be fixed, land managers/owners can get out there, reduce bushfire fuels in the potential firegrounds and improve bushfire resilience in threatened communities. Things will start to get better straight away. There is also a substantial economic benefit: preventing bushfire damage is much cheaper than trying to put them out and then rebuilding in their wake.

There is also the advantage that this approach has been tried and tested and was found unequivocally to work. The ‘Fix the Climate’ approach, by comparison, is speculative.

But there are disadvantages, Firstly, fire prevention is not sexy. Nobody gets any credit for a disaster pre-empted. Journalists and inner-city people love a good bushfire. It is the ultimate theatre, with swooping water bombers, firefighters putting their lives at risk, forest infernos, houses bursting into flames, farmers shooting burnt sheep in blackened paddocks, funerals with bagpipes, and so on.

The other disadvantage of the pre-emptive approach is that environmentalists hate fuel reduction burning, saying that it destroys the biodiversity and generates smoke (which contains CO2). Green fear of prescribed fire and climate change dominates bushfire policies in all Australian states at the moment (with the exception of WA) with the result that Australian bushfire management (when seen in terms of outcomes rather than inputs) has fallen to Third World standards.

For this reason the “Fix the Climate” approach seems to have the numbers amongst Australian governments … and little wonder. Firstly, it enables them to side-slip responsibility for inaction in the fields of effective land management and mitigation. If world-wide changes in climate are the cause of bushfire calamity, a State government in Australia cannot be blamed. Secondly, they escape the wrath and ballot-box revenge of the environmentalists.

Finally, and most tragically, Australian governments are increasingly being suckered in by the media and the aviation industry to put their faith in water bombers. Everybody else knows that even the world’s mightiest fleet of water bombers cannot slow the progress of a crown fire in heavy forest. Nobody blaming climate change for unstoppable bushfires seems to appreciate this irony: on the one hand they claim that climate change has made fires unstoppable, but on the other hand they assert that if we have enough water bombers the unstoppable fires will be stopped.

There is a way through all this nonsense. We could stop arguing about whether nasty climate change caused by emissions of nasty CO2 is the cause of nasty bushfires … instead we could adopt a set of strategies that prevents a bushfire from becoming nasty – and does so almost immediately, not in 30 years time. We know how to reduce fuels in bushland, and how to harden up communities in bushfire-prone areas, and we know that these strategies work and can be implemented on the smell of an oily rag compared to the water bomber approach. We should adopt them, not simply because they will be effective in reducing bushfire disasters, but because they will work irrespective of projected climate change.