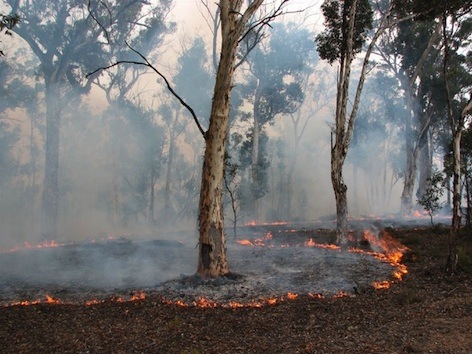 The skies in South Western WA in autumn usually carry large volumes of smoke from prescribed burning in forests. While there have been some complaints from urban areas about the amount of smoke, the Bushfire Front applauds the efforts of the Parks and Wildlife Service in carrying out these burns. They will greatly assist in addressing the large backlog of burns due to past restrictive policies.

The amount of burning in autumn varies greatly from year to year, according to the weather. In some years, the rains come in April and continue into winter frequently enough to prevent any burning at all. In other years, such as 2019, cooler weather and occasional rainfall events allow several days of ideal conditions for prescribed burning.

These burns are absolutely necessary to protect people in rural and peri-urban areas, towns and industries from disastrous bushfires. They are also a crucial part of forest management to mitigate wildfire damage to forest growth, water catchments and wildlife.

Low intensity prescribed burns are a critical factor in nutrient recycling in forest ecosystems, an essential process in maintaining forest health. By controlling the water use by undergrowth the burns help the overstorey trees cope with drought. Drought stress in jarrah forests has become a major management problem in recent years.

For a discussion on burn impacts on wildlife see About Fire>Impacts of Bushfires.

While people with asthma or other breathing problems have had some difficulties during smoke events, they receive adequate and timely warnings from authorities and have had various measures they could take to alleviate any problems. For a discussion of the health issues surrounding bush smoke see About Fire>Smoke.