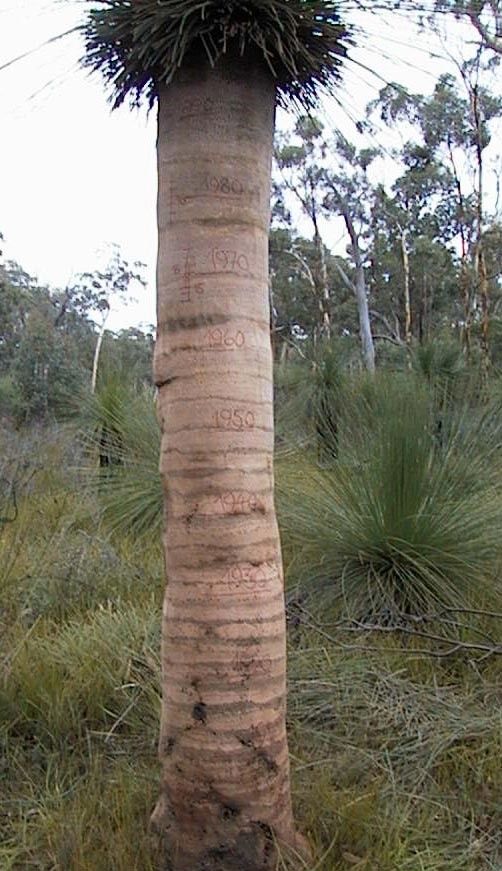 This grasstree is near Karagullen, WA. Careful chemistry and histology confirm that the dark marks (lapachol) show past fires, and the faint brown marks in between (tannin) are annual growth marks. Given a constant growth rate for these plants, it can be seen, beyond doubt, that fires were much more frequent in the past than at present. Local orchardists confirm that their families (some back to 1880s) burnt the bush that frequently, until prohibited by Local Government in the 1950s. They say that fires then were much milder, could be put out with wet bags, and could safely be left to burn unattended for days.

I have thousands of these old fire marks, on hundreds of grasstrees, in wandoo, jarrah, and tuart forests. Most show much the same intervals as these, but usually a little more frequent in tuart (2-3 years) and slightly less (3-4 years) in jarrah and tuart. A few go back to 1750. One of these veterans shows a gap in burning when Noongar leaders Midgigooroo and Yagan were shot, in the 1830s.

I have shown such stems to three meetings of Noongar Elders. One gentle old lady listened carefully, then asked ‘Why are you telling us what we know already?’ Others confirmed that 3-4 years was the most common interval in jarrah, and the Chairman of one meeting wrote to the then Minister for the Environment, telling him so, and explaining that such intervals led to mild, safe fires, and were of benefit to native plants and animals. I don’t know if he got any reply or action.

More recently, a group of academics from Murdoch Uni, Curtin, and UWA, have claimed that my conclusions are ‘unreliable’, or ‘discredited’, because they do not agree with their refereed findings from models, and satellite images from the late 20th century. I have more faith in the Noongars and old settler familes. I have also lost faith in some referees.

The Hon Amber-Jade Sanderson Minister for the Environment Dumas House, West Perth, WA Dear Minister Bushfire management in south-west forests Thank you for your letter (reference 76-05152, dated November 2, 2021). It was pleasing to read your commitment that “there is no…