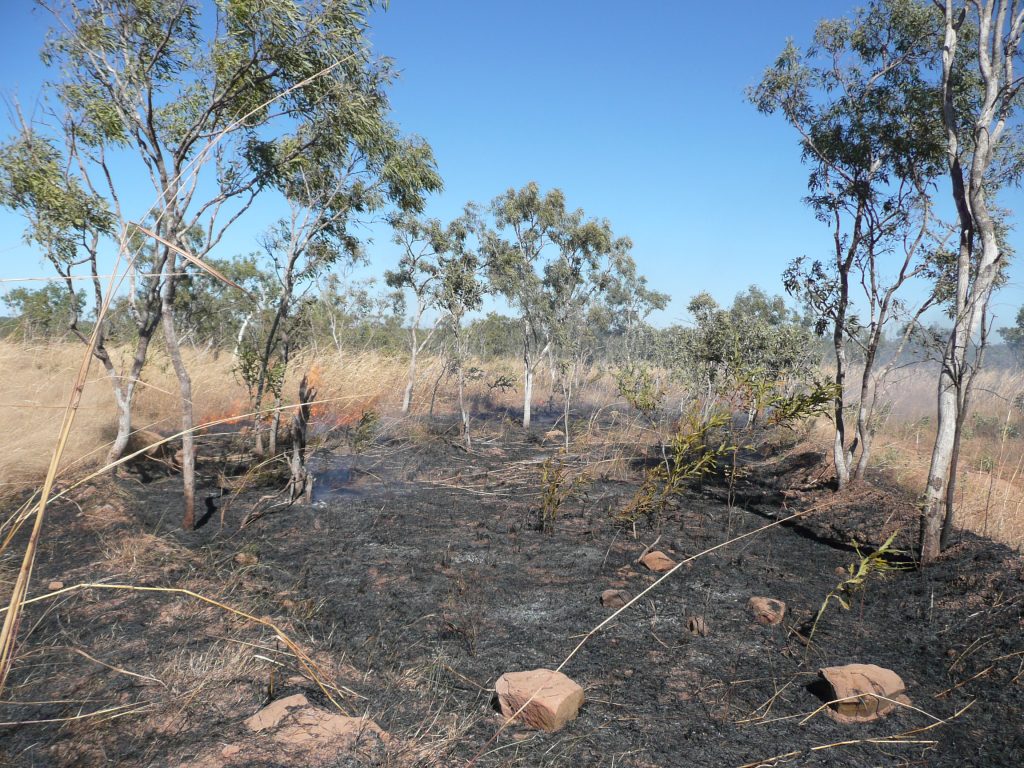 While public attention and the focus of the 2020 Royal Commission into National Natural Disaster Arrangements will naturally relate to the recent summer fires and fire crises in Qld, NSW. Vic and SA, it is important to also consider the other “out of sight and out of mind” fire-related issues in the remote outback, woodlands and deserts across Australia.

In these areas many millions of hectares of unmanaged fire are a regular occurrence with some impacts on infrastructure and assets (as we saw with the blockage of the Eyre Highway in January 2020 due to bushfires) and major ecological and biodiversity impacts at a landscape scale. Management and resourcing of fire matters, land management, fire preparedness and mitigation in the Australian ‘outback’ is at a very low level or mostly non-existent. This needs to change.

In recent years, especially in the Goldfields Region in WA, considerable resources have been allocated to firefighting and fire response, spending millions of dollars in an unplanned and reactive way, when pre-planning, preparation and mitigation would be much more efficient and economic.

The scale of recent fires in the WA deserts and woodlands is immense with many millions of hectares burnt. The fires are usually of extremely high intensity and are doing immense environmental damage, resulting in ecological change. The following maps, compiled from periodic satellite imagery, reinforce this (Source – Landgate Firewatch https://firewatch-pro.landgate.wa.gov.au/).

The data are displayed by the month in which the fire occurred, as this affects the severity of impact. See legend at Figure 3 below.

The first map shows the extent of woodland, mallee and sandplain vegetation fires including the December 2019 and January 2020 fires that burnt around 500,000 ha of the southern Goldfields and closed the roads north and south of Norseman and the Eyre Highway for 12 days. This caused a significant disruption and a major economic cost to WA. 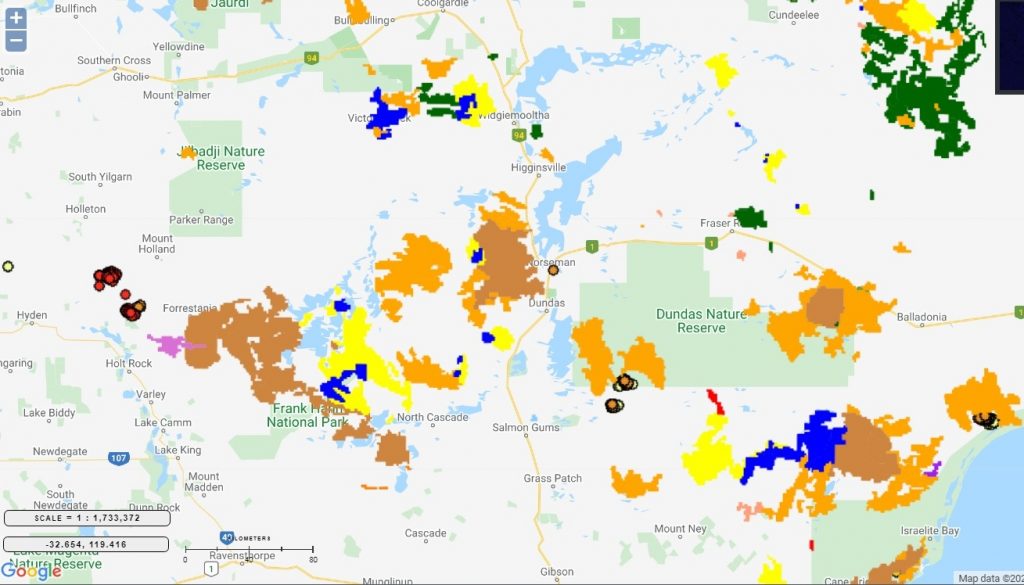 Figure 1. Bushfires in the southern Goldfields and western Nullabor January 2019 to January 2020 (legend as for Figure 3 below)

There were even more extensive fires in the central WA deserts with over 3 million hectares burnt in the Great Victoria Desert in the last 2 summers as shown in the following map. 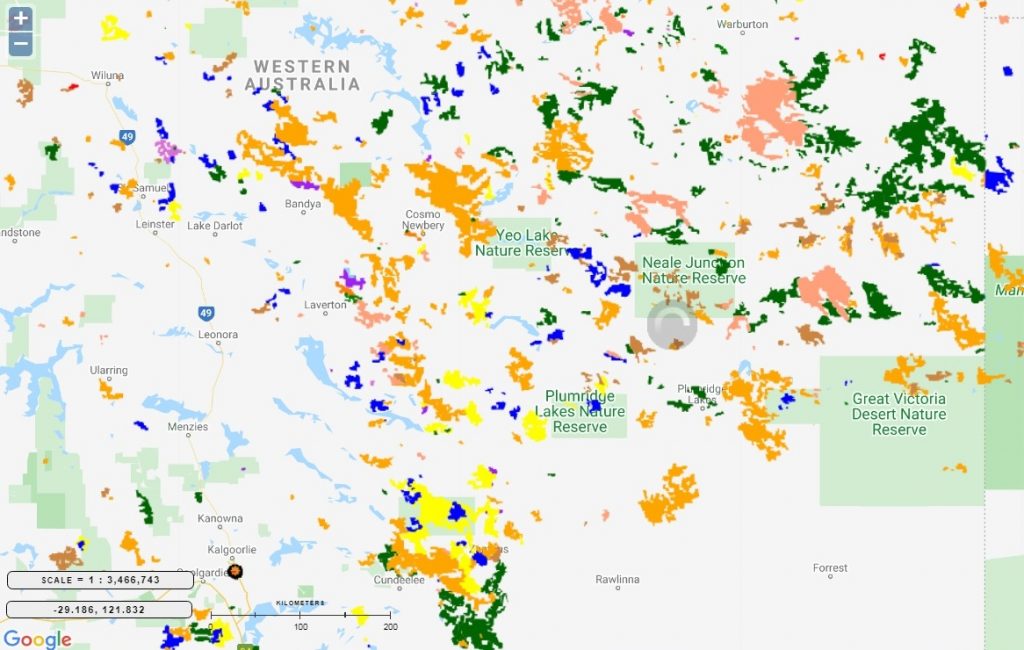 The fires burnt 60% (160,000 ha) of the 270,000 ha Queen Victoria Springs Nature Reserve (NE of Cundeelee) during a high-intensity fire in a 2 week period in March 2018. It did considerable damage to this important conservation reserve which contains rare and endangered flora and fauna and priority ecological communities. The unmanaged fire issue is escalating across inland WA as shown in the 2010-18 fire history map below. Very few of these fires are reported in the media with only a few people aware of their scale and serious impact. 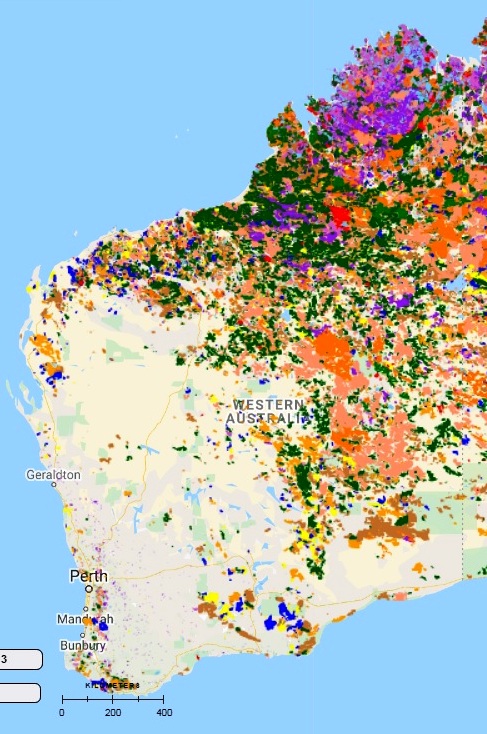 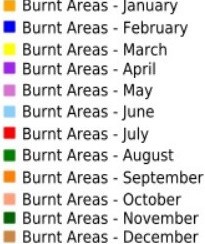 Figure 3. Fire history map of Western Australia showing areas burnt by bushfires in the years 2010 to 2018. Areas burnt from September to March have a severe ecological impact.

There are many difficulties relating to managing fire in the WA outback. Local Governments in remote WA have jurisdiction for bushfire control over vast areas, but tiny resources, and they are incapable of carrying out effective bushfire management. This is also true of the WA Parks and Wildlife Service which has the additional responsibility for fire preparedness on unallocated crown land (UCL) but almost no funding for this. There is only a skeleton of trained staff in remote regional WA, millions of hectares of UCL as well as parks and reserves to manage.

There are also vast areas over which Native Title has now been determined, creating a new paradigm in land and fire management. While Government agencies have the authority to manage fire, it is subject to an agreement for the right to access from native title holders. The responsibility for management rests with the native title holders. However, few groups have the capacity to manage their exclusive possession native title lands. In WA the Bushfires Act still applies and bushfire management and mitigation works would be in the normal way but again potentially subject to an agreement for the right to access. There is currently a policy and procedural vacuum in this area. The few resident Aboriginal communities and ranger groups do not have the capacity for the required intensive land management and little of the required resources are available or being allocated. 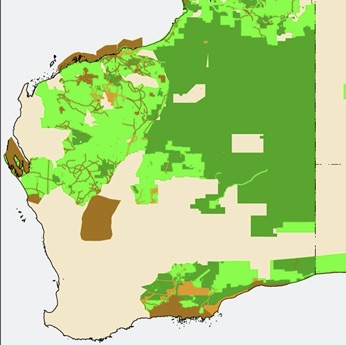 The Parks and Wildlife Service in WA has done the necessary research, developed prescriptions and undertaken some targeted aerial prescribed burning in the past. With assistance some Aboriginal groups do some burning including aerial burning for areas through their ranger programs, but resources are minimal, and the scale required to achieve management and mitigation will never be achieved with ground based operations. Overall, almost no planning or pre-emptive preparation for fire is carried out on about two-thirds of WA, leaving these areas vulnerable to the ubiquitous summer lightning storms.

Once the fires start, there is little that can be done to stop them. The WA Department of Fire and Emergency Services (DFES), with WA Parks and Wildlife, and some help from Shires, miners, pastoralists and volunteer brigades, do their best, but it is mainly a business of tracking the fires by satellite and then trying to tie them in when they burn out to roads or threaten assets. The principal strategy is to wait for this year’s fire to burn into last year’s fire. When fire fighting does occur it is enormously expensive. In December 2019 and January 2020 it has been reported that various WA Government agencies spent in excess of $5 million fighting the fires in the Norseman area alone; the second summer in a row that such amounts have been spent in the southern WA Goldfields.

36%, or 93,600,000 hectares of WA is Unallocated Crown land where, except for parts of the Kimberley region, almost none has any effective bushfire planning or management. Currently there is shocking damage being done across the deserts and to the beautiful and internationally unique Great Western Woodlands, where tree species are extremely fire sensitive. In some areas (Eg the Great Western Woodlands) the fire planning has been done through a bushfire threat analysis but there are almost no resources for implementation, fire preparedness and mitigation work, while millions of dollars continue to be spent on expensive reactionary fire fighting and associated recovery and rehabilitation.

Although the details are different in other States the situation is essentially the same. Outback areas have totally inadequate fire management except for relatively small areas where aboriginal groups have commenced some prescribed burning.
There is a part-solution, or at least a start towards a better system in WA. The State government should be resourcing and undertaking the necessary planning, implementing fire mitigation and improved access measures and introducing a mosaic prescribed burning program involving all land managers. This would create low fuel buffers into which bushfires will run, providing firefighters with a manageable boundary during suppression operations when needed, especially to protect assets. Spending money on preparation and mitigation would save multi-millions in firefighting costs and at the same time help to protect these valuable elements of the environment.

The current emphasis on unlimited funds for firefighting and recovery and minimal funds available for preparation, planning and mitigation is wrong. ‘Fire fighters’ and associated public perceptions and pressure have hijacked the political agenda leaving the fire and land ‘managers’ with minimal resources. The emphasis is currently wrong and needs to be shifted.

Resources are seriously inadequate for all aspects of fire management in the outback. It is difficult to secure a share of resources when urban and rural lives, property and asset protection are the political priority. This does not lessen the need; it just requires more resources, reallocations and a close look at the economics of preparation vs firefighting and recovery.

State and Commonwealth governments need to invest much more in preparedness and mitigation including planning, improved access, firebreaks and most importantly prescribed burning to manage fuel loads and to introduce a manageable fire mosaic across the landscape. This applies to all areas including the outback and deserts.

The Commonwealth government needs to reinstate and greatly expand the former National Bushfire Mitigation Program. This modest program provided funds from the Commonwealth and State governments for preparedness and mitigation works. It was successfully used in the WA Goldfields to reopen and create access tracks, for creating firebreaks and buffers, planning, mitigation and undertaking aerial prescribed burning. A much expanded and carefully targeted program directed specifically at mitigation, through State and local governments, would facilitate fire preparedness works across the outback. For every dollar invested there would be many more dollars saved from the very expensive fire fighting and even more expensive recovery expenditure.

In WA much more money from the Emergency Services Levy needs to be allocated to fire preparedness and mitigation works. The current over-emphasis on purchasing fire fighting equipment, buildings and supporting DFES requires rebalancing to invest more in mitigation efforts to reduce the number and severity of bushfires, allowing resources to be allocated to the outback areas.

There is much talk about indigenous fire management programs and traditional burning. There are great opportunities in this area. However, our experience is that currently, for most areas, there is neither the capacity nor ability to introduce ground based traditional fire management at anywhere near the scale necessary across the forests, deserts and woodlands. What is needed, as has been adopted at a small scale in some areas, is adapting traditional fire management into aerial operations at a landscape scale. Initial work in this area for the WA deserts has been successful, constrained only by the lack of resources.

The WA government needs to address the new paradigm of determined native title areas and management of these for landscape scale fire control and mitigation programs. Policies and procedures need to be developed, access agreements arranged and programs resourced and introduced to build capacity and ensure implementation.